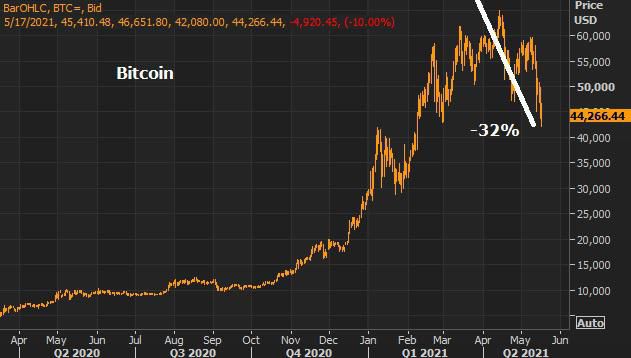 On Friday we looked at three key charts as we ended the week.

We also looked at the ugly chart in the dollar (bearish).

This all supports the coming inflation storm scenario we discussed on Friday.

And we may be seeing clues in today’s market behavior that suggest people are waking up to the seriousness of that scenario.

First, here’s a look at bitcoin…

Bitcoin is off 32% from the highs of just one month ago.

Gold broke out this morning above the key $1,845 level, on the back of news that the administration will be distributing even more direct cash handouts (disguised as child tax credits). I say “disguised,” as these payments (also called benefits by the Treasury) will also be disbursed to those that don’t pay income taxes. So, this, in addition to the first two tranches of direct payments, is looking more like another step toward universal income.

So, the government continues to up-the-ante on insane deficit spending, despite a developing boom in the economy, with retail sales back above long-term trend, household net worth at record levels, personal savings near record levels and asset price appreciation in the double-digits.

To this point, gold has been the laggard in asset class performance (still down year-to-date). But with this formula, it may catch up very quickly.

Get my Little Black Book of Billionaires Secrets here.

The Bitcoin Versus Gold Debate May Quickly Reverse Course originally appeared on Forbes.com 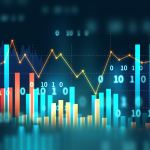 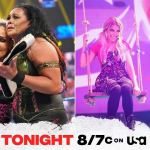