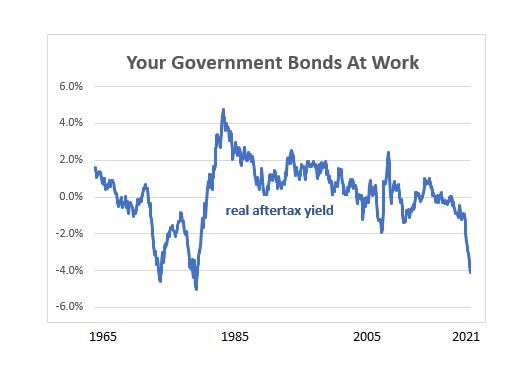 If you own any Treasuries, take a grim look at what’s left after inflation and taxes.

Inflation has already crossed the 6% mark. Are we going to see 7%? What does that do to savers?

My answers are “Yes, soon” and “They get slaughtered.”

The inflation rate, as measured by the one-year gain in the Consumer Price Index, topped 6% for October. The rate for November, due to be released Dec. 10, will approach that unlucky 7 number.

Professional economists are expecting 6.8% for the November figure. I’m slightly more optimistic with a 6.7% forecast. But inflation is likely to get worse before it gets better.

There’s a good chance the 7% line will be crossed. I think this will happen in the December CPI, to be revealed early next year.

Rates like these are making a sucker out of anybody who wants to save money. Ten-year IOUs issued by the U.S. Treasury yield 1.5%. That means your real yield—coupon minus inflation—is worse than negative 5%.

The same government that issues low-rate bonds and creates high-rate inflation does a third thing to savers. It taxes them. So let’s take a look at real, aftertax returns on ten-year Treasuries.

It’s a sorry picture. The negative reward for saving is now testing the lows hit four decades ago.

The worst it got was in mid-1980, when the ten-year Treasury was paying not much more than 10% and inflation topped 14%.

What do you do if you’re trying to save for a rainy day—or for a house, college or retirement? There’s not a good answer to that question.

You can sit still while the U.S. Treasury makes you poorer with every passing year, or you can take your chances in the wildly overpriced stock market. Earnings yields on stocks are horribly low at the moment, around 3%, but investors put up with them because bond yields are so much worse.

Might bond yields turn the corner, creeping into positive territory? They might someday. I wouldn’t count on it. It is public policy to punish saving. Money is taken from frugal people and given to spendthrifts.

Look at Congress, which sets an example for the country with its trillion-dollar deficits. Or look at the politics. A telling exchange took place two years ago between a voter and a presidential candidate proposing a plan to forgive student loans.

“My daughter is getting out of school,” the voter said. “I’ve saved all my money. She doesn’t have any student loans. Am I going to get my money back?” He was told: “Of course not.”

There are different ways to figure real returns. Ideally, you’d adjust the bond yield for future inflation. But the future is not knowable. In the chart I used an average of the trailing one-year and annualized three-year inflation, a calculation that pegs current inflation at just over 5%. Since I own some bonds I hope the rate in coming years is mostly lower than that. It’s just a hope.

For the tax rate in the graph I used a constant 33%. The top-bracket rate got as low as 28% during the Reagan administration and is now 37%.

What Does 7% Inflation Do To Your Bonds? originally appeared on Forbes.com 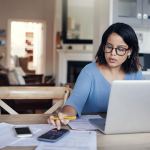 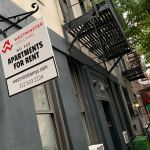